(Most Hindus are naive and historically it has been easy to CON them. Simple slogans – “Garibi Hatao”, “Aam Admy” is what it took to fool them. Other simplistic slogans conning many Hindus include “Right”, “Center Right”, and these are often covers for maliciously peddling SickuLiarism and anti-Hindu hate, while feigning understanding and sympathy. These perversions result in half baked and ignorant efforts to describe India’s problems, prescriptions that are not rooted in native realities, and destined to fail.  Many of the people shaping these anomalies define themselves  based on western frame works – as right of center, or conservative, or classical liberal, or libertarian etc. Insightful would tend to call such people as Sickuliar Right or HINO (Hindu in Name Only) or BINO (Bharatiya in Name Only) or IBCDs (Indian Born Confused Desis) or simply confused desis. Let us define these people and the anomalous positions they are projecting as SickuLiar Right, for convenience and also because  many of them seem to have discomfort asserting their native identities in public space. Cunning among them wear a native facade exceedingly well (Mein Bi Hindu Hoon Deceit), but the mask slips as you scrutinize their positions on substantive issues. Here we catch Swapan Dasgupta while his mask is slipping. Not a surprising media crooks like Rajdeep Sardesai etc introduce Swapan Dasgupta as “Rightist”, “BJP sympathizer” etc. Best selling Author, Rajiv Malhotra has a lot to do with the masks slipping from the faces of closet SickuLiars. Rajiv’s work has resulted in organized efforts at abusing/undermining/demonizing him)

Writing in Open Magazine, Swapan Dasgupta (SD) pens lots of canards. The goal of course is to confuse further the already bewildered Hindus. This post was a quick review on the Swapan piece.

As someone firmly committed to the dismantling of protectionist barriers, I argued that the media could hardly claim special status.

At a superficial level, SD’s take on media looks a reasonable take. Let us examine this further. AB Vajpayee actions, listening to such half baked wisdom, resulted in India’s main stream media becoming what it is today – corrupt, controlled by dubious and a den for crooked. To understand the effect of dismantling that SD cites, read on about one of Delhi’s media mughals – NDTV Prannoy Roy.

The real issue when we are dealing with the economy as always is the national interest, and creation of level playing field. Apart from the government, incumbent businessmen do try to impose self-serving protectionist barriers often under the cover of “free market”, and “right to choice” shibboleths. For eg – check out Bill Gates specious defense for GM food.

END_OF_DOCUMENT_TOKEN_TO_BE_REPLACED

Ashutosh Varshney is charlatan and a good example of how chicanery and sepoyism operate. Read on to understand further.

Self-styling himself as an “intellectual” he peddles many canards perhaps deliberately. On, America, Ashutosh Varshney writes

Media is supposed to be a watch dog for citizens. In India, media is corrupted. Main reason for this corruption is control of media by those whose agenda is anti-native. This results in dangerous subversion. What people watch as news is faked reality, carefully calibrated. Sickular agenda effectively contorts what Indian people see as news. Rise of internet has broken the media oligopoly. Thanks to the online efforts of bloggers & tweeple, now more & more Indians are getting a peep into reality.

This empowerment of Indian people among others was celebrated by Amitabh Bachchan, Bollywood Icon. Amitabh cited a recent article in DNA written by tweeple @Rajeevsrinivasa. Rajeev’s artcile specifically commends the work of tweeple @swathipradeep2 @barbarindian @preeti86 @sandeepweb and @atanudey for their work in de-mystifying sickular canards and exposing deceit. Now #barkhagate, #chormedia, #ibnlies, #mediamafia #radiamedia are part of lexicon.

Yesterday was an important day for Indians. A day when 21 years of Kashmiri Hindu ethnic cleansing by islamists got completed. It was a unique event in the annals of history. Hundreds of Thousands of Kashmiri Hindus, native people of Kashmir, were driven out through coercive threats. State government apparatus failed.  In the true traditions of islamist sickular discourse, the Hindu victims were blamed for their victimhood, a canard disabused by Governor of the state in 1990, Shri Jagmohan. Government apparatus

Indian Government propagating rogue notions of sickularism failed to provide security to Hindu people. Supreme Court was appalled this week that the Govt provides only verbal commitments and no concrete relief to Kashmiri Hindus.

Native Indian people discussed online ethnic cleansing of Hindu people in Kashmir. They even made this major onlne trends while organized sickular media mafia was muted and provided hardly any coverage on the event. 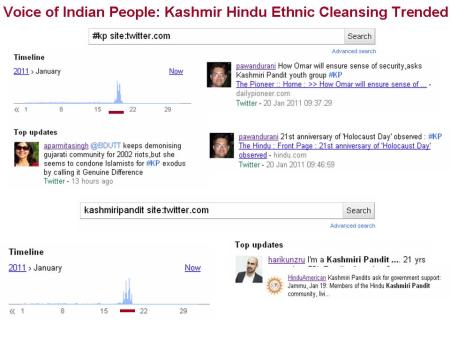 END_OF_DOCUMENT_TOKEN_TO_BE_REPLACED

In native Bharatiya Dharma, deceit manifested for doctrinal goals is a sin. Among others, MK Gandhi wrote about the importance of Satya in the discourse. In the asuric & sickular narratives, ‘means’… justfy the ends.

If you understand the above, you can make sense of the distortions carried out by Saba Naqvi and Outlook Magazine. Saba Naqvi ended up twisting the telephone  interview of B Raman, Retd Additional Secretary, RAW. Worse Begum Saba Naqvi attributed thoughts to B Raman which he never made..Malicious that. Not surprisingly, B Raman was appalled and issued a public rebuttal in his blog-post, tweeted about it.

END_OF_DOCUMENT_TOKEN_TO_BE_REPLACED

There was a concerted effort in the period following following 26/11 terror attacks alluding to a conspiracy. The buzz was that there was a hidden hand which ensured that the top cops ended up at a single point to be sitting ducks for Pakistani terrorists. Sly allusions were towards Hindu organizations and even IB as perpetrators/enablers of the attack. Sonia dynasty led Congress party’s Digvijay Singh responsible for building party’s muslim base in UP among others has been taking similar lines, engaging with others involved in islamic terrorism.

3. The presence of mafia stooges in Mumbai police is known. There is evidence of D Company providing logisitcs support to 26/11 attackers and its nexus with islamic terrorists.

What is far more plausible is D Company taking advantage of LeT/ISI’s 26/11 operations, used its stooges to get the policemen at one place and strike at them. Concerted efforts to shift blame on Hindu organizations for attack on policmen by sections of left media and groups that are suspected as over ground faces of islamic terror lend credence to this view point.

Ashok Kamte was someone committed to native Indian traditions. He used to perform Pujas including Shastra Puja. 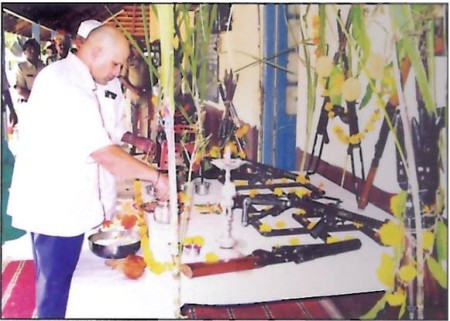 One can be fairly certain that the present government, which is a practitioner of vote bank politics and its corrupt big media poodle will not allow real facts on 26/11 to be made public. There is close collaboration financial (Emaar etc.) of Islamic lobbies and the current sickular Indian dispensation. So, facts that Karkare/Salaskar familes were/are sympathetic to RSS, the islamist nature of terror attack will be underplayed/censored in the corrupt big mass media. On account of the unexpected, capture of Fidayeen, Ajmal Kasab, by Hindu Policeman, Tukaram Omble, islami/laal disinformation initiative to palm 26/11 as Saffron Terror has failed.

Church linked IBN Lies Live, a channel that collaborates with India’s CON party (Congress I (islami-isai)) is caught yet again lying. This time on Mahatma Narendra Bhai Modi, leader of native Indians who the native Indians adore more than they love themselves.

Narendra Modi is targeted because CON party and its low IQ Gandh like rahul gandhi can not digest Mahatma NaMo’s popularity among Middle classes for bringing in development – schools, healthcare, infrastrcture, effective governance, things which corrupt feudal CON party has not been able to manage in last 60 years and remains incapable of matching in future as well. Since CON party cant pull themselves up they want to pull down High Achievers like NaMo using devious means.

IBN Lies claimed that NaMo says ‘we would have to convince our own people (in the government) that violence can not provide solution to the (Maoist)problems. Killing the innocent people(by our security forces) would not solve the (Maoist communist) problems. Putting down the weapons(by our security jawans) and initiating the talks(by the government with the rebels) under constitution’s limitations is the only way out for solution(of Maoism problem).

You can see the original video of NaMo’s statement in Aligarh below:

NaMo actually said ‘we would have to convince the Maoist Communists that violence can not provide solution to the problems. Killing the innocent people by Communist Terrorists would not solve development related basic problems). Putting down the weapons maoist Communist terrorists and initiating the talks with the government under cover of Constitution is the only way out.”

IBN Lies Live Editor in Chief Rajdeep Sardesai, who sponsors christian fundamentalist world vision is presently president of Editor’s Guild of India. He should be thrown out from Editor’s Guild for peddling motivated lies as news.What do you think?

Post Script: Mahatma NaMo himself publicly exposed media deceit through this interview where he articulated the reality and his position on communist terrorism:

This seems to be a survey season as UPA 2 completes one year of governance.

IBN Lies and Hindustan Times have carried out a survey which purports that Manmohan Singh is Strong Leader. The survey appears outright dishonest as the widespread perception in India is that Manmohan Singh is a quintessential bureacrat that has rarely displayed leadership and has preferred the path of least resistance that has allowed UPA chairperson sonia, whose family has a track record of massive international corruption and her crooked partners like the DMK to loot big.

It has been noted by many commentators that NDTV, IBN Live and Hindustan Times have a track record of dishonesty, lack of integrity and closeness to certain parties and ideologies that has resulted in their consistently subverting news, while claiming to stand for high standards of ethics through self tom-toms.

This effort is to validate the accuracy of NDTV survey.